Odessa on a six-match winning streak 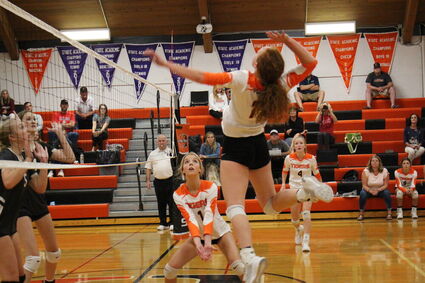 Senior Hayden Schuh goes for a kill shot against the ACH Warriors on Thursday, Sept. 22. The Lady Tigers are currently ranked third in the NE1B.

ODESSA- The Lady Tigers swept the Almira-Coulee-Hartline Warriors on Thursday, Sept. 22. The home conference game lasted just over an hour and was highly competitive.

With a narrow loss the Warriors were determined to match the Tiger's competitive first set, but in the second set Odessa won 25-22.

Odessa finished the job and won the third and final set 25-16.

The Valley Christian Panthers lost to Odessa after f...