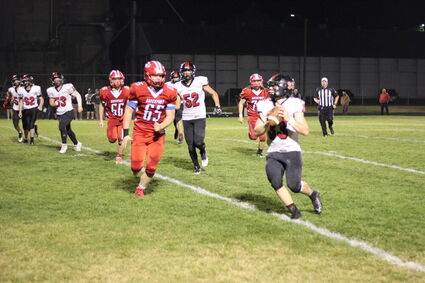 Liberty quarterback Jake Jeske looks to throw a touchdown to wide receiver Ashton Strobel while evading the pursuit of Davenport defensive lineman Wyatt Telecky as time expires in the first half last Friday. The Lancers came back to beat the Gorillas 41-27 Sept. 30.

DAVENPORT-For one half, it looked like the Gorilla football team could be earning a big bounce-back win against league-leading Liberty following a setback at Lind-Ritzville/Sprague the week prior. But Lancers quarterback Jake Jeske decided that wouldn't be the case, leading Liberty to score 27 straight points in the game's final 25 minutes en route to a 41-27 Liberty victory over Davenport.

Jeske accounted for all six of Liberty's touchdowns, running for three himself and throwing three to Ashton Strobel.

Fullback Sam Schneider got the scoring going in what turned out to be a traditionall...