Gorillas drop a pair of matches 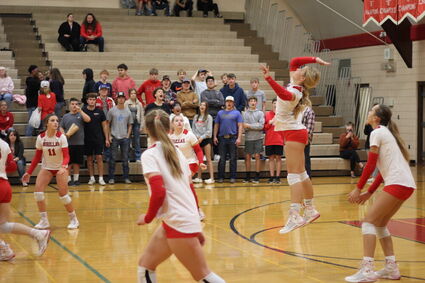 Davenport freshman Chloe Hammond goes for a dig against Chewelah Thursday, Oct. 20. The Gorillas fell to the Cougars in four sets.

DAVENPORT-After a hot stretch near the end of the regular season, the Gorillas didn't conclude their final two matches like they wanted to, dropping matches to Chewelah and Liberty. Davenport still accomplished something it didn't last year...being one of eight schools to qualify for the District 7 tournament next week.

The Gorillas went to last Thursday's match against the Cougars in a three-way tie with Reardan and Northwest Christian for fifth place in the league. Davenport allowed 10th place Chewelah to gain some confidence in a back-and-forth first set, and several service errors gave...