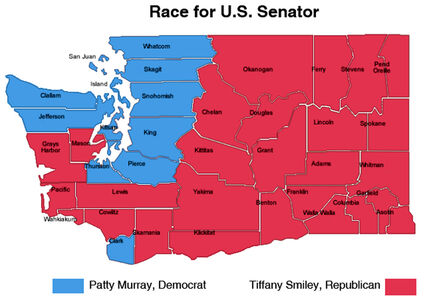 The map shows the counties Tiffany Smiley is winning in red and incumbent Sen. Patty Murray in blue.

In fact, she had the lead in 27 of the state's 39 counties in the Tuesday, Nov. 8, general election. Yet, she was still losing to career politician Patty Murray, D-Shoreline.

Smiley was unable to be reached for comment prior to press time.

Late-arriving ballots will continue to be counted...