The magnetic achievements of Clay Soliday 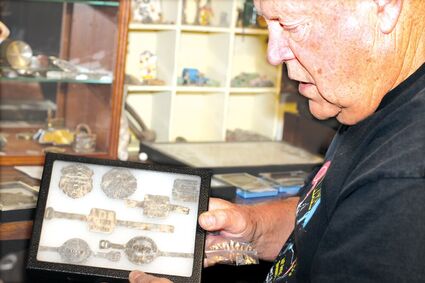 Reardan native Clay Soliday shows off one of his many treasures unearthed during his metal detecting escapades. Soliday has been collecting coins since he was a boy, which led to his current hobby that has taken him all over the world.

REARDAN-Local resident Clay Soliday is historian, detective and treasure hunter. Armed with his metal detector, he finds vintage baubles, rare coins and everything in between.

Soliday started collecting coins in Kettle Falls when he was in fifth grade. He and a buddy discovered an abandoned car while playing "cops and robbers." He found an old coin under the backseat and was hooked.

In 1982 he won $1,500 in a bowling league, which he spent on his first metal detector. By then the government had stopped making silver currency, so digging coins from the ground "was the only way to find coin...