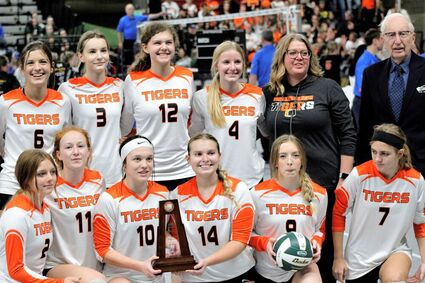 The Odessa volleyball team receives their sixth-place trophy at the WIAA 1B State Tournament in Yakima Friday, Nov. 12.

YAKIMA – The Odessa Tigers came into the WIAA 1B State Tournament as the No. 12-seed and minimal expectations.

That made it all the more surprising when the Tigers finished in sixth-place in the tournament and were just a few-point-swing away from potentially finishing fifth.

Odessa ended up in the fifth-place bracket after beating No. 5-seed Liberty Christian 3-2 on Nov. 10 before losing 3-0 to eventual semi-finalist Naselle, also on Nov. 10.

Odessa continued to put on the upsets – this time beating No. 9-seed Wilbur-Creston-Keller on Nov. 11, advancing to the 1B fifth/sixth place gam...