Cougs catch fire from three against Eags in Spokane 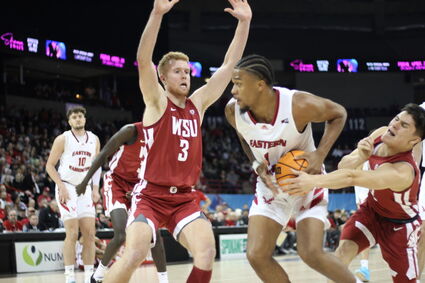 Photos by Drew Lawson | The Record-Times

WSU junior Jabe Mullins cuts off EWU junior Tyreese Davis in the Cougars' 82-56 win over the Eagles at the Spokane Arena Monday, Nov. 21.

SPOKANE-In a battle of Inland Northwest schools, it was the Washington State Cougars doing the hunting from three-point land against the Eastern Washington Eagles. WSU knocked down 15 threes, including a career-high eight from St. Mary's transfer Jabe Mullins, en route to a convincing 82-56 win over EWU at the Spokane Arena Monday, Nov. 21.

WSU never trailed in a game it had to have to avoid falling to 1-3 this season after two early season losses to Boise State and Prairie View A&M.

Mullins came into the game just 3-11 from downtown through three games this season before his breakout perf...