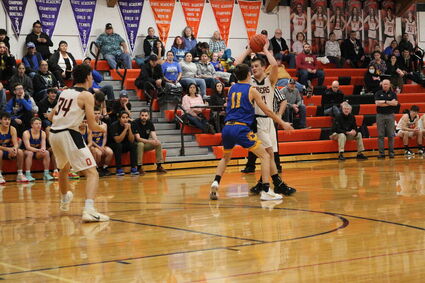 Jacob Scrupps looks for a teammate to pass to Saturday, Jan. 14.

ODESSA— The Tigers suffered a 45-point loss, 80-35, during their game against Wellpinit Saturday, Jan.14.

The Redskins scored 12 points to Odessa's three within the first four minutes of the first quarter.

Odessa's defense struggled to keep up with Wellpinit's offense, often getting trapped.

By the end of the first quarter, Wellpinit led 20-7.

But the Redskins kept making their three-point shots and, by the end of the second quarter, were leading 45-16.