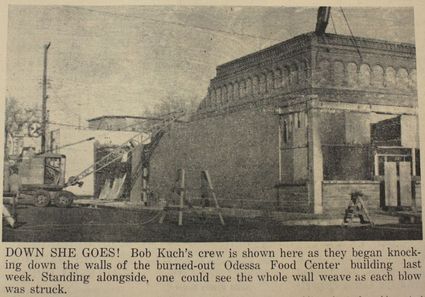 After a suspension of general traffic for three weeks during which Odessa has had but one train a day service from a special between Spokane and Leavenworth, Agent Stillwell of the Great Northern states that he has received information that the road will be open and regular train service resumed today. The trouble started in the Cascades with the rains which caused slides and later on account of high water on the west side which took out the bridge at Sultan and did much other damage. The tie up was the worst the road has ever experienced on this division.

New army comes from class No. 1

All men for the war armies still to be raised by the United States will come from class 1, under the new selective service plan. That means the nation's fighting is to be done by young men without families dependent upon their labor for support and unskilled in the necessary industrial or agricultural work.

Provost Marshal General Crowder announced the new policy in a report on the operation of the selective draft law submitted to Secretary Baker and sent to congress. He says class 1 should provide men for all military needs of the country and to accomplish that object he urged amendment of the draft law so as to provide that all men who have reached their 21st birthday since June 5th, 1917, shall be required to register for classification.

Also in the interest of fair distribution of the military burden he proposes that the quota of states or districts be determined hereafter on the basis of the number of men in class 1 and not up on the population.

Private Alexander Kook, released from the army hospital at Vancouver, where he was treated for several weeks following an illness while stationed at Dutch Harbor, returned home during the week end with an honorable discharge from army service.

Mrs. E.D. Nickerson of Nickerson, Minn., has arrived to take the second "trick" at the Great Northern depot, in charge from 4 in the afternoon until 11.

Five new firemen were added to the active list of the Odessa volunteer fire department at its business meeting this week. They include Frank E. Wraspir, Leon Dobson, Henry Michaelsen Jr., Al Wolf and Tony Nichols.

The light sedan belonging to Harvey Haase was almost totally demolished Saturday evening when it went off the grade at the Dobson ranch east of town, bounced off a tree and clipped a pole on the high tension electric power line. Haase at the wheel, escaped with only minor injuries.

Among the eight men of a group of Lincoln county selective service registrants accepted for army service were Joe Hardung, Odessa, and Victor Buddrius, Marlin.

Conrad Stroh Jr. has received three snapshot pictures of Lawrence Stroh, relaxing in luxury under a palm tree in the Hawaiian Islands.

Paul Schafer writes that he is with the staging unit at Camp Stoneman, private first class, and is still the assistant company clerk.

The south area young people report that skating is good at the York coulee, with smooth ice, covered by a light snow. At Pacific lake the ice is rougher. The rubber conservation program is cutting in on ice skating this year, but many find means of getting out.

The city council met Tuesday night for installation of officials and reorganization. C. E. Graedel and A. W. Birge, reelected councilmen, and E. J. Wachter, elected treasurer, were installed. Mayor Jantz announced that no changes in committee appointments would be made.

The walls came tumbling down: On the first work-day of 1968, the wall of the burned-out Odessa Food Center building "came tumblin' down."

Bob Kuch of Marlin had equipment on the site early Tuesday with which he began the task of knocking the twice-fire-scarred walls into the hole which, until recently, had been a basement of the store. Wielding a 1,000-pound weight on the end of a boom truck, the foot-thick walls crumbled as each blow was struck. The whole west wall could be seen waving as the dismantling process started on the north end.

The west and front walls were down by mid-afternoon and Frank Groh was busy with his small track tractor and scoop pushing the bricks and debris into the hole.

Some of the wall sections were knocked down with the steel weight while the boom on the truck was used to push in other sections.

Plans are to fill the basement, it is reported.

No plans have been made for rebuilding. The walls are being torn down as they have been considered a hazard to pedestrians and parked automobiles.

Forey Walter Honored by Nomination: Inland Empire Sports Writers and Broadcasters (SWAB) nominated Forey Walter for Inland Empire Athlete of the year in recognition of his outstanding track performances in 1967. Forey is the only "B" high school athlete recognized in the list of 63 top amateur athletes released this week by Spokane papers. Leland Boyk, Odessa track coach reports.

Forey commanded recognition with his three-year sprinting performances for Odessa high school, three-time State "A" sprint champion with climaxing records in 1967 of 9.6 seconds in the 100 yard dash and 21.3 second in the 220 yard sprint. He also holds all State A.A.U. sprint titles and shares the National Junior A.A.U. 100 yard dash record of 9.6 second with present world record holder Jimmy Hines.

"It is indeed an honor for Forey to be included in this select group," Boyk said.

Last year Walter was honored for his National A.A.U. championship (1966) in the afternoon's "Junior" section of this affair.

It could rate with the big ones, like the fierce winter of 1968-1969. Some people in Odessa can recall the winter of 1948-1949, and a few can even remember the one of 1932-1933. There were mountain-like snowdrifts then, and there were stranded farmers and stalled motorists.

This winter, the snow continues to fall day after day, not great amounts of it, but enough to have caused two early closures and one late start for the Odessa schools. Winds ranging from 15 to 35 miles per hour have caused drifting snow. The drifts in the roads are plowed out, only to be drifted shut again when it snows and blows a little more.

The area north and northeast of Odessa has been hit hard by the weather. South of Odessa, there is less snow, but that hasn't precluded the drifting. Roads are often impassable until the county plows come through.

School was dismissed at 12:15 on Thursday because of the drifting snow. The Odessa school administration said the objective was to get the students out of town and to their homes in the country before the roads were blown shut. With single-digit temperatures and a 35 mile-per-hour wind, the wind chill factor was well below zero.

Students living in the country had to work hard at getting in for classes and activities.

The Odessa Record and other businesses got phone call from Marty Meise, head of the Lincoln County Road Crew for the Odessa area, saying the plows were coming in because of the snow falling and the drifts were shutting the roads as quickly as they opened them. Some heeded the warnings and left immediately. Others thought they had more time to get home and continued to work.

First step toward sewer: A decision is expected next Monday at a meeting of the Odessa Town Council on whether or not to apply for a Centennial Clean Water Grant to fund a water system facility plan.

The move would be the first step in Odessa's hoped-for sewer project. But even if the grant is received and if all time lines are met, the earliest that the town could expect to see ground broken for a new sewer would be three years hence.

Dave Doeringsfeld of the engineering firm of Wyatt Jaykim met Friday with council members to discuss various town projects, foremost of which was the sewer. He reminded that the grant application is due on February 26.

Wyatt Jaykim is retained by the Town of Odessa for engineering consultation. That firm could write the grant application for a nominal fee. But the council is also considering making use of the services of local volunteer grant writers.

Town Clerk Sharon Hester said that the town would be checking with state agencies responsible for making the grant to see if the grant can be written locally and still meet grant eligibility requirements.

If the application is made by February 26, it would be at least two months before the state Department of Community Development would be able to notify the town that it had won the grant.

The Centennial Clean Water Grant would fun 50 percent of the $50,000 to $70,000 cost of preparing the facility plan. The other 50 percent would be obtainable through Farmers Home Administration funds at no cost to the town. 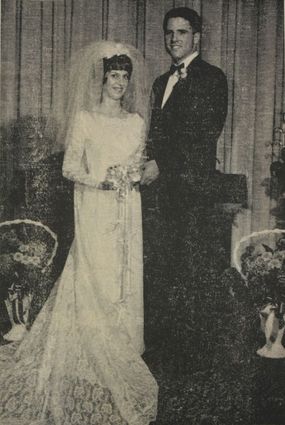 In a wedding service performed by her father Rev. John A. Birchard, pastor at the English Congregational Church in Odessa, Karen Birchard in early 1968 was married to David Catey of Seattle.

It would be about a year, Hester estimated, before the facility plan could be submitted to the state and approved by the Environmental Protection Agency, the state Department of Ecology and other agencies involved. Once that process is completed, it would be possible to provide every Odessa householder with information on the cost per household of a sewer.

"Our need becomes greater and greater for a sewer," said Hester. The town is still able to grant septic tank permits for new construction, but the county Environmental Health Department already has placed limits, such as the number of rooms in a new dwelling, in approving applications.

Once a facility plan is approved and costs of a sewer are presented to Odessa householders, an advisory vote would probably be called for to ascertain citizen approval of the project.

Doeringsfeld said at last Friday's meeting that the town should be considering both a comprehensive long-range water engineering plan and a two-year plan, for items needed immediately.

The long-range term includes plans for the sewer. The two-year plan would cover main replacement and reservoir and well repairs and updates.