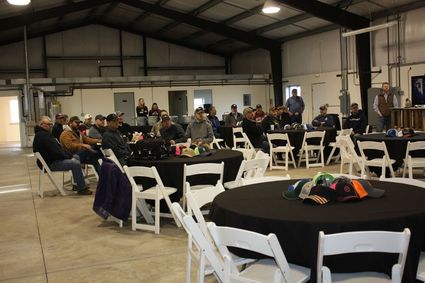 Area farmers and other interested persons attend the open house given by Hinrichs Trading Company upon becoming a tenant of the Odessa Industrial Park.

Hinrichs Trading Company opened its doors to the Odessa community and to potential growers of garbanzo beans (also known as chickpeas) on January 31 at the Odessa Industrial Park.

The Hinrichs family has been involved in agriculture in the Palouse for five generations. Their company headquarters is in Pullman.

The company was established in the early 1900s by Max Hinrichs, Sr. for processing grass seed. His son Max, Jr. switched to processing wheat seed in 1925, and his sons Bob and Don Hinrichs also later joined the company.

From the 1950s through the end of the last century, the company a...