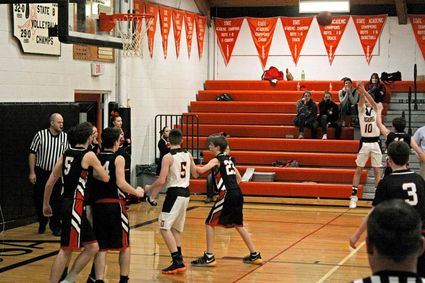 Jayd Jennings takes the three-point shot Tuesday in the boys' win over Northport in a playoff game at home in Odessa. Jett Nelson (5) moves in for a rebound attempt.

Scheduled to play Inchelium on this past Tuesday here in Odessa, playoff officials were scrambling with a last-minute problem. A half-dozen or so of the Inchelium players became academically ineligible after second quarter grades were released. The game was handed off to the next team in line, Northport.

The Tiger boys handily defeated Northport, coming on hard and fast from the tipoff and never giving the opposition a breather. Even when the second string Tigers came in to give the first string a breather, the domination continued without letup.

Ryan Moffet led the scoring with 25 points. Jayd Jennings added 13 and Colton Hunt had 11. Every player on both the first and second strings was able to score at least once.

Marcus King led the rebounding with 7.

With the win, the Tigers move on to the district tournament finals this weekend.

The boys will play Saturday, February 10, in Deer Park, facing off against Wellpinit at 2 p.m.