White Knuckle, Frostbite live up to their names 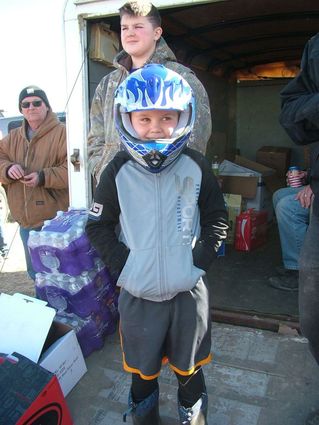 Casey Starkey won the kid-sized helmet in a raffle held during the White Knuckle/Frostbite weekend.

Last weekend's motocross racing took place south of town on sagebrush-covered land in weather more winter-like than it had been just a few weeks before. It was also windy, which brings with it the wind chill factor.

But the Stumpjumpers Motorcycle Club members are a hardy bunch, and they turned out in even larger numbers than they had last year, as reported by Odessa police chief Tom Clark at last night's town council meeting. He also said there were no reported serious injuries or any other disturbances among the many riders who camped in their RVs.