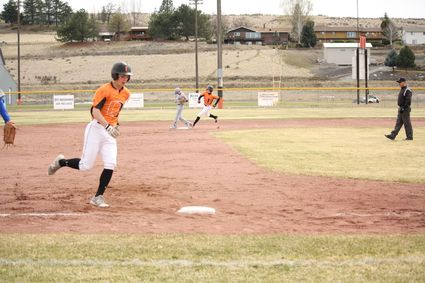 The Odessa Tiger baseball team continued to dominate, defeating its first league opponent Northport in both games of a double-header, 23-1 and 23-0, on March 27.

Theron Schlomer was the starting pitcher in game #1 and went three innings, striking out six and walking two. He gave up one hit for a run. In relief, Tim DeWulf struck out two batters and gave up no walks.

Camden Weber and Colton Hunt each got three hits, and Marcus King got two. Weber's at bats gave him six RBIs, while King, Jakob Starkel and Joshua Clark each added three RBIs. Clark, Hunt and Weber each hit a triple in this game.

In game #2 of the double-header, starting pitcher Weber went two innings, and Jett Nelson provided another two in relief. Nelson struck out four and walked one, while Weber struck out three and walked three.

Odessa continued its winning streak at home in Odessa on March 31 against Curlew, 20-0 and 19-0.

Starting pitcher Theron Schlomer went three full innings, walked one and struck out six. Camden Weber relieved him in the fourth inning, walking one and striking out three.

Schlomer also had a good day at the plate, going three for three and driving in four runs, while Weber and Nelson got two hits each. Weber and Schlomer racked up four RBIs each, and Marcus King added two more.

Weber hit a home run, and Jett Nelson had a triple.

The Tigers' next game is April 10 against Columbia at Hunters in a double-header beginning at 2 p.m.