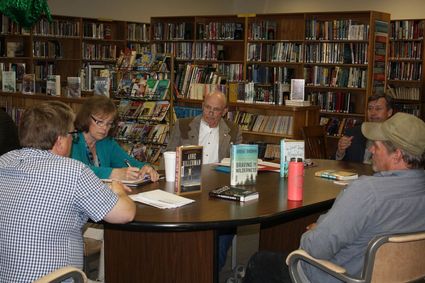 District 13 legislators, Reps. Tom Dent (center) and Matt Mannweller (top right) and Sen. Judy Warnick (second from left), met with Odessa citizens Tuesday morning in the Odessa Public Library. Only four members of the community appeared to ask questions of their elected representatives, school superintendent Dan Read (left) and businessmen Jeff Huiras (right) and Jerry Schafer (who was seated next to Huiras but didn't make it into the picture).

The Board of Directors of Odessa School District #105 met on Wednesday, April 25, 2018 in the district office at 5:30 p.m. to review district policies and procedures and in the high school library at 6 p.m. for its regularly scheduled monthly meeting.