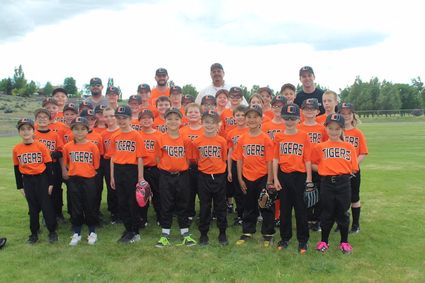 Boys and girls from this spring's Little League teams in Odessa sport their new T-shirts courtesy of volunteer donors. Their coaches, back row from left, were Cory Kramer, Ryan Frick, Alberto Reyes and Cade Weber, with help from many of the parents. More than 30 youngsters came out to learn baseball fundamentals.

Alberto and Lyndsay Reyes took over the task of organizing more than 30 Odessa boys and girls playing Little League baseball this year. Alberto has taken on the role of attending Little League board meetings in Ritzville.

The Odessa league consisted of three teams, one major league team and two minor league teams coached by Cory Kramer, Ryan Frick, Alberto Reyes and Cade Weber. The season lasts from early April until late May with volunteer coaches and parent helpers teaching the kids the fundamentals of baseball. The Odessa teams played against teams from Ritzville, Davenport, Reardan and...