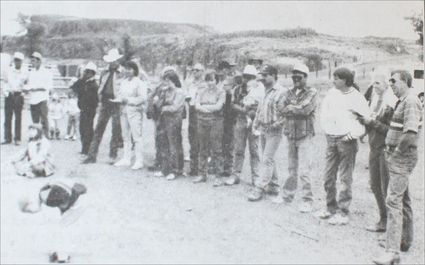 Spectators and adopters alike watched as names were drawn for the adoptions.

Two men drown in Crab Creek: Clarence Hamilton and Ernest Hoppe the victims. Small boys who saw the accident say Hamilton got beyond depth. Hoppe went after him.

The treacherous waters of Crab Creek, which at this season of the year is considered by many a practically dry stream, claimed the lives of two young men, Ernest Hoppe and Clarence Hamilton, while they were bathing at Ferrier ranch 10 miles east of Odessa Sunday afternoon.

Mr. Hoppe was a son of Mrs. Adam Weber and Mr. Hamilton, a hired man whose home was a...