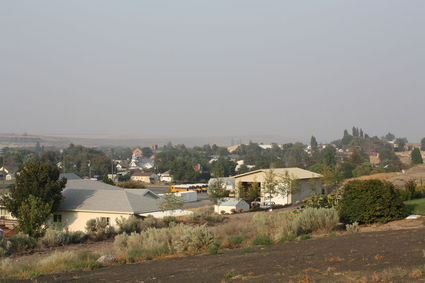 The town of Odessa exhibited gray skies Tuesday afternoon as haze covered the area and, in fact, almost all of the Northwest as the result of lightning-caused wildfires in Washington and additional fires in western Canada. Outdoor sports events in various communities have been canceled or postponed.

This story was compiled based on various official government reports posted to the Internet.

Fires continue to rage all around eastern Washington, with major blazes currently engaging firefighters near Kennewick and around the areas of Coulee Dam, Grand Coulee and Electric City. Officials have determined that lightning was the cause, and firefighters are hard at work endeavoring to contain them.

On Monday, Odessa firefighters responded to a field fire on Rimrock Road, located about half way between Odessa and Wilbur and spent the rest of the afternoon putting out that fire. It did not black...