Season over; OHS falls to Pomeroy at District 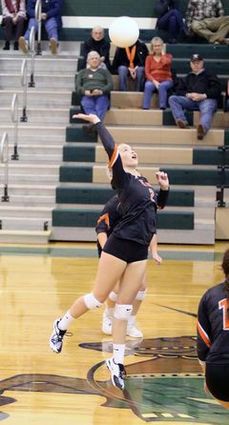 Tori Weishaar looks perfectly fraceeful as she reaches for the ball in a match against Pomeroy on Friday, November 2.

It was a busy week for the lady Tigers with two matches Nov. 1 and one on Nov. 3. Racking up two more wins and suffering one loss, the Tigers worked hard to keep their standing.

In the first match against Northport, Odessa won it, three games to one to take the match.

The girls were some spiking fools in this game. Tori Weishaar, Mya Boss, Maddy Wagner, Emily Scrupps, Brenna Carstensen, McKennah Davison and Caitlyn Schuh each had four spikes in the match. Davison led the team with 12 kills and Wagner added another 8 kills.

They dug deeper and harder than any gravedigger I've ever met, not that I've met many. Wagner led the team with 12 digs, with Carstensen and Schuh following closely behind with 8 digs each.

Wagner led the team in attacks with 23 kills. Davison was right behind with a total of 13 kills.

Once more the team went out of their way to dig deep. Carstensen had 23 digs, followed closely by Schuh and Wagner with 20 digs each.

Match number 3 for the week was played Saturday, November 3, against Pomeroy. Pomeroy came out the winner in this match, 3 – 0.

Leading the team in kills for the game was Wagner with 6, followed by Davison with 5.

Carstensen led the team in digs with a total of 12, followed closely by Wagner and Schuh with 9 apiece.