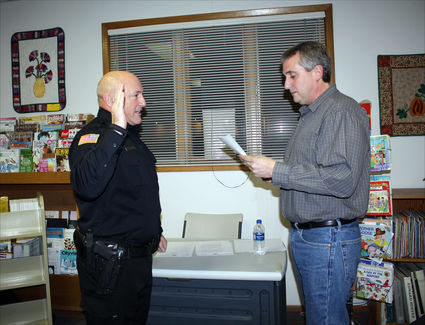 Odessa's newest police chief (or town marshal if you prefer) Brent Dell is given the oath of office by Mayor Bill Crossley at Monday night's meeting of the Odessa Town Council.

Monday night's meeting of the Odessa Town Council included the swearing in of the town's new police chief Brent Dell by Mayor Bill Crossley. The meeting was followed by a "meet and greet" session with the new chief. Dell said he was originally from Michigan but has spent his law enforcement career in the state of Washington with his first posting in Seattle. His most recent former job was in Kennewick, but prior to that he had been located in Okanogan County, nine miles from the Canadian border. Having come from a big city, his work in Kennewick was too urban for him, he said, adding that, when he saw the ad for a chief in Odessa, he couldn't get his application submitted fast enough.

The council also discussed the coverage contract with the Lincoln County Sheriff's Department, which had been approved in December, but with the new chief in place would now need a revision. One candidate interview for an additional police officer has been scheduled, Mayor Crossley said. Thus far the only candidates who have applied have no prior law enforcement experience and would have to first attend the police academy to become eligible to become members of a law enforcement department. Chief Dell will have a say in who is hired and added that the whole process of hiring, training and so on would likely take as long as six months.

So the discussion then turned to the $12,000 per month cost of the current contract. Council member Vickie Iverson said she felt the cost of the coverage was much too high, especially since the town now had the salary of the new chief to pay in addition. Crossley waited for more discussion from the council members who mostly mumbled (or maybe it's this writer's hearing) and appeared not to know what they wanted to do. Town clerk Denise Snead reminded them that a decision was needed before the next council meeting on January 28 so that proper arrangements could be made. Iverson then made a motion that the contract payment for January be reduced to $9,000 because the new chief of police would also have to be paid and would himself be providing additional coverage.

There was another long wait for a second to Iverson's motion, but Landon Lobe, after consulting with the mayor about meeting with Sheriff Wade Magers to hammer out payment details, finally seconded the motion which then passed unanimously.

After a member of the public asked the council what had been done when former officer Bryce Peterson had been the sole police provider after the retirement of Mike Wren and then later on of Helen Coubra from the force, current council members said they did not know how long Peterson had acted as the sole provider. Even councilman (and Lincoln County Undersheriff) Kelly Watkins said he did not remember those details.

Further research by The Record has found that the time period in each case cited was five months or more during which Peterson kept watch over the town backed up only by the routine patrols of the Sheriff's Department deputies during their regular shifts.

In further business, the council elected Watkins as the mayor pro tem.

Odessa fire chief Don Strebeck reported quiet times over the holidays. He also reminded the council and public that the Firemen's Auction will be held February 23, a Saturday, and that consignment items are being accepted now. Any members of the public wanting to obtain extra cash by bringing in old equipment, tools, vehicles (running or not) are welcome to participate. The fire department takes a small commission on each lot sold, but the bulk of each sale goes directly to the seller.

Public Works director Rod Webster reported that newly installed LED lighting in the town shop should pay for itself in electrical costs in about two months. He also said he has been working with Steve Nelson of Century West Engineering on mapping the town streets to be repaired once weather permits. The Council approved his request to once again declare as surplus the garbage truck, vac truck and street sweeper in order to try again this year to sell them at the Firemen's Auction.