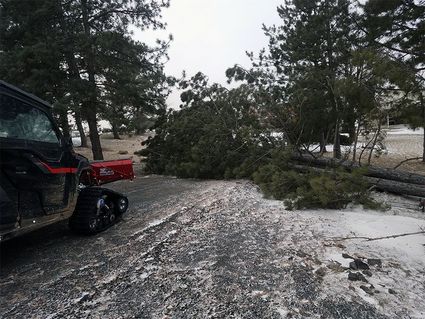 At the home of Dolores Graedel, pine trees came down during Saturday's wind storm. The wind, frigid temperatures and snow residents inside.

After a very mild start to the cold season, Old Man Winter decided suddenly to get serious, sending an Arctic blast to the Pacific Northwest. Even the west side was digging out after Saturday's winds blew through, toppling trees, lifting roofing, scattering debris all over Odessa and piling up several inches of powdery snow.

The passes in the Cascades got loads of snow, too, leading to closures and dangerous conditions. Low temperatures in the single digits were present in much of eastern Washington. Most area schools were closed, although Odessa's remained open wit...