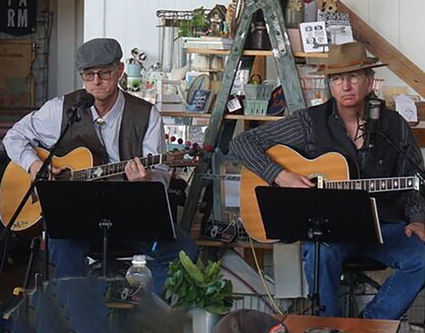 2/23/19 – Harrington – Seating at The Post & Office in Harrington was full last Saturday afternoon, February 23, for The Hawk Creek Acoustic Guitar Duo of Randy Beamer and Lynn Caddell. The duo is a new collaboration. Caddell shared how they got started: "Randy and I retired recently and moved our respective families to the Hawk Creek community (north of Davenport). We happened to meet at a community event and started talking about guitars...we discovered that we had common interests in acoustic guitar, song writing and community involvement. At the time, we were both searching for another guitarist to partner with. We set up a time to play and discovered very quickly that our guitar styles complemented each other's songs. We have been collaborating ever since. I was beginning to think that I was going to need to advertise in Spokane to find the type of musician I was looking for. It turned out that he was living up the street from me."

Beamer moved to eastern Washington from Marysville. He retired as a manager from the Boeing Company after nearly four decades. He's been involved in music most of his life, playing in school and military bands and directing swing bands and small quartets. Caddell moved to this area from Bremerton. He is a retired educator and high school principal. He started playing guitar at eight years of age and played with various community, school and church groups over the years.

Beamer and Caddell are very supportive of community efforts and donations from those who attended were designated for the Harrington Food Bank. They played 16 original songs at the coffee shop. Caddell explained, "All of our songs seek to tell a story about life in the long tradition of folk songs. One song, 'Half is Left' tells a true story about sharing a single piece of gum. The gum ended up being a metaphor for the emotional impact of broken relationships. Another example of the type of songs we seek to write is 'Song for JB.' It is about the suicide of one of Randy's dear friends. Ultimately, the song is an emotional reminder that we all need to take care of each other."

The Post & Office, owned by Heather and Justin Slack in downtown Harrington, is a great venue for small events. It's a congenial place to gather and visit and share interests, whether a how-to-workshop, gallery showings or intimate musical gigs such as this one by The Hawk Creek Acoustic Guitar Duo.CC