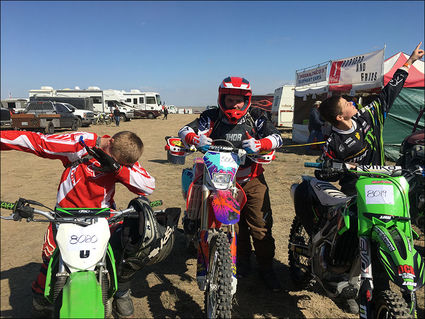 Tucker Walter, Tanner Estep and Josh Valverde took part in this past weekend's races south of town. Not pictured: Don Valverde, who was injured in a mishap Saturday and had to miss Sunday's race.

Organizers from the Stumpjumpers Motorcycle Club arrived in Odessa a couple of weeks ago. While they waited for the snow to disappear, they attended some Odessa events, including the Chamber of Commerce banquet. A week of warmer weather finally got rid of the snow and unfroze the ground enough so that marking of the courses for two weekends of motorcycle racing could begin.

This past weekend the Frostbite and White Knuckle races were held south of town on properties owned by Marlon and Jerry Schafer, Neil Jeske, Clark Kagele and Lynn Schmidt. The Frostbite Grand Prix took place Saturday, with approximately 300 racers participating, while approx. 200 competed in the White Knuckle Grand Prix on Sunday.

The Record is aware of only a few Odessa riders in this year's races. Adult riders were Tanner Estep who raced both Saturday and Sunday and Donald Valverde who raced Saturday but not Sunday. A mishap on Saturday had injured Valverde's leg, so he was forced to rest on Sunday. Also racing in the youth division were two Odessa boys, Tucker Walter, son of Colley and HaLee Walter, and Joshua Valverde, son of Don and Heather Valverde. 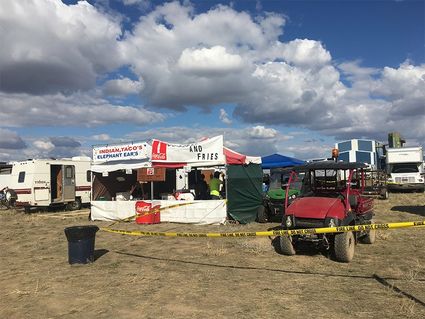 Food was available near the race site as well as in town.

Prizes for the races were sourced locally this year, with Etched Dreams providing T-shirts and trophies for participants. Odessa EMTs were present at the site to handle injuries to race participants, and the EMT Club reported brisk sales of breakfast burritos and biscuits topped with sausage gravy. An outside vendor sold burgers, fries and soft drinks in addition to Indian tacos and elephants ears. Local Odessa vendor J's Kettle Corn was on hand with the standard version of that salty/sweet confection, as well as offering several new flavors on a trial basis. The