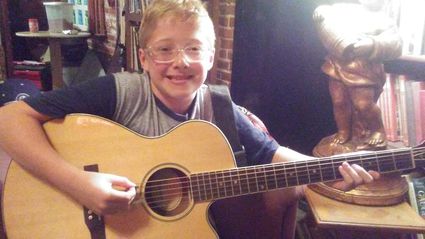 Dominic Hicks plays a borrowed guitar while awaiting a chance for an instrument of his own from the Guitar Ministry for Kids.

Nate Lathrop has recently started a Guitar Ministry For Kids for the specific purpose of helping Odessa kids obtain guitars. Anything to help kids keep occupied with a wholesome activity, and perhaps even induce them to put down the computer or phone for a minute or so. He also recognized the need for a place and way to try to raise money for the coming July 27 First Annual Christian Rock Festival, to pay for the event, advertising, T-shirts, etc.

Lathrop received a letter from Odessa elementary student Dominic Hicks, saying "Dear Nate, I have been waiting for so long to get a guitar, since I was small, and I love guitars so much." Lathrop responded to Dominic, "Yes, I love guitars, too, and yes, I can help you get one."

How great it would be, Lathrop thought, if money could be raised to help kids get guitars. Dominic was the first to submit a letter requesting one. But Lathrop also wanted to help kids needing any instrument. He suggested that people could donate old instruments in working order or needing only minor repairs that could be fixed. Or folks could just send in a check or donation, and get a receipt and a thank you in return.

Some other ways the public could help would be, first and easiest, to come and enjoy the Christian Rock Festival on July 27, where the plan is to give Dominic a guitar. There will be faith-based music by both local and guest bands in downtown Odessa, praising the Lord with song and dance. T-shirts can be purchased, and proceeds will be used for both the musical instruments and for the Rock Festival.

The festivities are planned for Saturday, July 27, from 10 a.m. to 6 p.m. Local musicians include The Highlanders (Richard and Steven Molsbee), The Way (Christina Leffler and Nate Lathrop), local pastors Jonathan Hayashi and Tom Van Der Ende, plus a special invocation and presentation of the flag and presentation of the Star Spangled Banner sung by Shannel McDowell, in addition to guest bands J5OM (Just Five Old Men) and Unchained.

If you are a kid needing a guitar, please write Lathrop a letter, and one will be put into the works. Contact Nate Lathrop, Attn: Guitar Ministry For Kids, P.O. Box 757, Odessa WA 99159 or find him in the Rolling Thunder Pizza Shop. "Thank you, Dominic, for getting it started," said Lathrop.