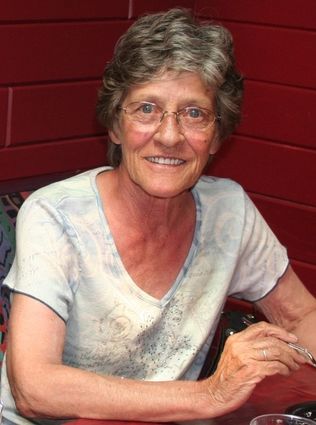 Margaret Mary Tracy (nee Kroetch) passed away on August 6, 2019 at the Spokane Veterans Home. Affectionately known as Peggy or Maugie, she was 76 years old. She was the ninth and youngest child of L. Ed and Serene Kroetch of Spokane. She attended St. Aloysius grade school and graduated from Holy Names Academy in 1960. She attended Eastern Washington College and the University of San Francisco. In Spokane, she worked for Tom Price Chrysler and the Spokane Club.

In 1987, she married navy submarine veteran Harry Tracy, and they resided in Pasco before moving to Odessa in the 1990s. In Odessa, Peggy used her artistic and mechanical talent to design and build numerous parade floats for the town of Odessa. For Deutschesfest, she volunteered time making kraut ranzas, strudel, cabbage rolls and kuchen. Her home was always open to her 30 some nieces and nephews and their children. She was universally regarded as an exceedingly fun aunt.

Maugie had diverse talents including painting, plumbing, wiring, landscaping and gardening. She left numerous paintings in watercolors, acrylics and oils for her many friends and relatives. Christmas was her favorite holiday, and she was quite creative in her generosity, decorations and gifts.

Her last years were spent in Ephrata at Garden Oasis. She was preceded in death by her husband Harry, her parents and brothers (Charles, George, Greg and Bill) and sister (Cathy Wilson), and she is survived by her sisters Jane Klasen (Ephrata) and Joan Moran (Spokane) and brother Dick Krutch (Bainbridge Island).

A Mass of Christian burial will be celebrated in her honor September 5 at St. Aloysius Church, 330 E. Boone Ave. in Spokane at 10 a.m., with interment to follow at Holy Cross Cemetery.