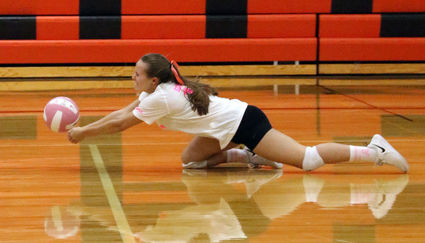 Maddie Scrupps digs the ball in a recent match, as the Tiger varsity continues on a longer winning streak.

The Republic Tigers faced the Odessa Tigers last Saturday, October 12, in Republic and the Odessa squad came out on top, 3-0. It was a pretty close catfight, as the scores show.

Maddy Wagner led the team in kills with 13, and Emily Scrupps added another seven. Jocelynn Hottell led in service aces with two.

Hottell and Wagner each had two blocks for the defense. Wagner also led the team in digs with 15, while Caitlyn Schuh and Hottell each added 13 digs. Schuh led in assists with 21. Wagner received serves 11 times, Maddie Scrupps nine times....