Tigers shut out Colton, Selkirk Rangers up next 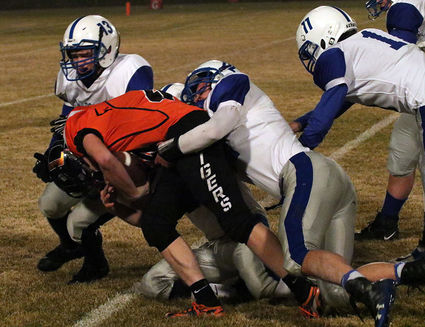 Will not got down without a fight. Josh Clark gives his all to avoid takedown by Colton players.

The Tigers defeated Colton last Friday evening at home in Odessa in a very uneven match-up (as all their contests have been all season). 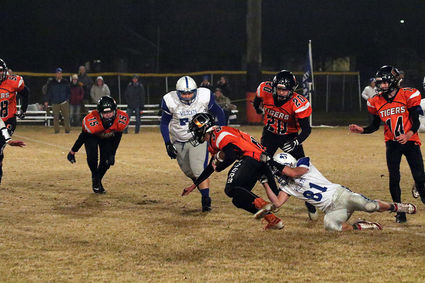 Daeton Deife drags a Wildcat across the field while Colton Messer, Chase Kissler and Colling Martin wait to assist.

Quarterback Jett Nelson completed two passes for 61 yards, in addition to contributing a two-point rushing conversion and was successful with one of two point-after attempts in the kicking game.

Odessa's defense was formidable and the main reason for the shutout against Colton. In the closing seconds of the game, Colton came very close to scoring, but the Tiger defenders chased down the breakaway runner and there was no time for another play.

Elder also led the team in tackles with eight, all of them solo. Deife followed with seven total tackles. Jaden Hunt sacked the Colton QB and Nelson pulled in an interception to help stop the Colton offense. Fumble recoveries, one each, were made by Clark, Keith Strebeck and Pilot Weishaar.

The Tigers play again this Friday night at 7 p.m. against Selkirk at Quincy High School.