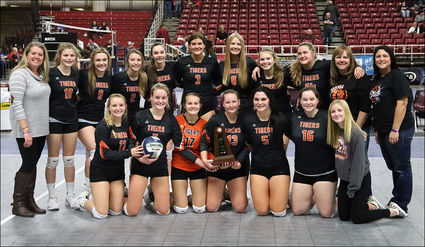 The Tiger volleyball team wound up in fourth place in last week's state tournament played at the Sundome in Yakima. On Thursday, the first day of the tournament, the team won their first game played at 8 a.m. in a 3-2 victory over Three Rivers Christian of Longview that went the full five sets. Later that same day, they faced Pateros and came away with a much easier win 3-0.

Competition heated up on Friday, the final day of the tournament. The Tigers faced Oakesdale, the defending champions of 2018, who had little trouble sending the Tigers into the consolation bracket. Oakesdale went on to...