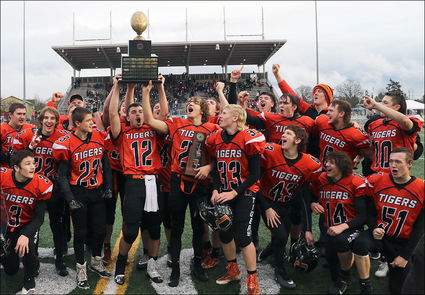 Odessa's ecstatic Tiger boys celebrate their win over Naselle on December 7 in Tacoma to capture the 1B football championship trophy for the second consecutive year. They won the championship last year for the first time in 25 years. Despite the fact that six seniors will graduate this year, the outlook for 2020 isn't so bad. There is plenty of talent among the underclassmen.

The Odessa Tiger football team completed their second consecutive unbeaten season to retain the 1B traveling trophy. For the senior boys especially, it was the culmination of an unbroken string of victories that had them pumped up for every game despite knowing that the eight-man, small-school league offered them very little real competition. The cheer squad was also with them all the way, encouraging fan support all season long.

For local fans who have watched these kids grow from pre-schoolers first learning the alphabet into the accomplished young adults they are today, it was a journey...