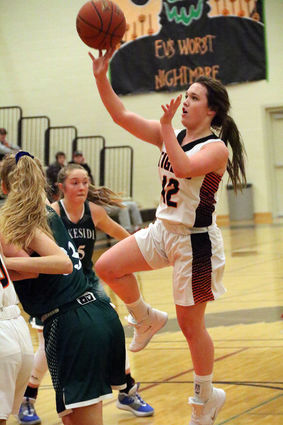 Layla Hardung shoots the ball from inside the key at the game against Lakeside on December 26.

The Tigresses of Odessa had a busy holiday season, with league, non-league and tournament games to keep their skills sharp.

On December 19 the Tigresses traveled to Reardan for a battle against the Reardan Indians, conquering them 55 to 41.

Ashlyn Neilsen dominated the hoop with a total of 17 points scored in the game. She was followed by Grace Nelson with 16, McKennah Davison wasn't far behind with 8, followed by Maddy Wagner with 6 and Kenadie Elder and Laela Hardung each with 4 points.