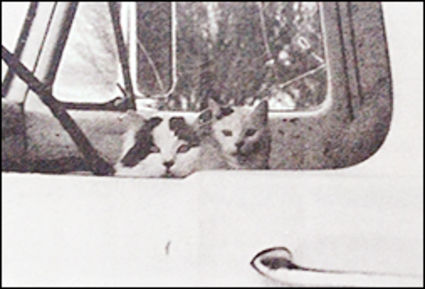 These cats are smart enough to get in out of the cold, wet weather Odessa is experiencing. The front seat of a wheat truck is just right to avoid the elements.

News updates: Harrington swamped Odessa, 25 to 3, in basketball. Charles Cone is reinstated on the team and it is expected that the team will be able to reverse matters when they play a return game this week.

The Great Northern has sent all its oil burning locomotives to Montana and are replacing them with coal burning, faster, smaller engines.

With the census under way the Farmers & Merchants bank is offering prizes to the one estimating closest to the population within the incorporated district.