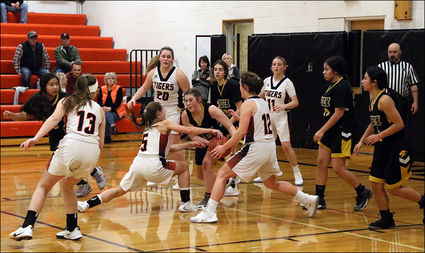 The Tiger girls had a very good game against Cusick last Friday at home in Odessa, coming up with a decisive 63-21 victory. In varsity action, Maddie Scrupps (#5) tries to snatch the ball from a Cusick player, surrounded by teammates Kaytlyn Shafer (#13), Tori Schlomer (#20), Katreace Boss (#11) and Laela Hardung (#12).

On Tuesday, January 14, the lady Tigers traveled to Oakesdale, where they faced a strong Nighthawk team.

On Friday, January 17, the Tiger girls hosted the Cusick Panthers in Odessa, and the Tiger team had a great game, winning 63-21.

Nearly every Odessa player scored in this game, led by McKennah Davison with 12, Maddie Scrupps wi...