By Chris Person
of the Times 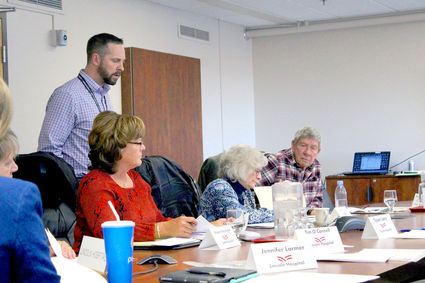 DAVENPORT-At its meeting Thursday, Feb. 20, the Lincoln Hospital Board of Commissioners discussed plans for a new 6.18 million dollar medical office building. Eleven general contractors attended an earlier project information meeting with four contractors submitting bids. As a government project, the board is required to accept the lowest bid from a qualified contractor.

According to Chief Financial Officer Timothy O'Connell, all bidding contracts expressed concern with the underlying rock of the building site. The depth of excavation needed to stabilize the new building remains unknown, as does the associated cost.

Construction is scheduled to start sometime between March and April, 2020.

The project will be funded by a 20 year bond with an estimated 2.75% interest rate and a two-million dollar down payment. The current bond will be paid off in December, 2020.

O'Connell estimates the hospital will have around two-million dollars in income this year, but stressed that may fluctuate in future years with varying provider payments. With an optimistic income forecast, the new bond could be paid off in just ten years.

The board discussed alternatives to a new building. The current Davenport Clinic building is 50 years old and for sale for $975,000. It could be remodeled as an alternative to new construction.

Interest rates are at a historic low and labor costs will rise in the future, Commissioner Shara Coffman noted, making an argument for new construction.

"What could make this project not sustainable." asked commissioner Donna Reinbold. O'Connell responded that "our achilles heel" is staff turnover. There are a limited number of providers and a provider leaving could cause a change to the reimbursement structure, he said.

Arguing for new construction, accountant Tyson Lacy pointed out that while 130 rural hospitals have closed in the past decade, the need for outpatient facilities has remained high. "A clinical setting is less risky than a hospital," he said.

"A new facility may lure new employees because it'll be an awesome work environment," Commissioner Coffman said, "and new patients too."

The board also discussed:

• The hospital is monitoring the coronavirus outbreak."we're keeping an eye on it, we've got supplies, we're checking in on it on a regular basis," a hospital official said, "cover your cough, wash your hands, stay home if you feel sick."

• Providers are performing Medicare depression screenings. Staff trained on the screening in 2019 and patients spend one hour with their providers during the screenings to "capture issues."

• An accountable care organization, Caravan Health, has been monitoring breast cancer and colorectal cancer screening at the hospital. Staff are working to give more screenings to increase preventive care.