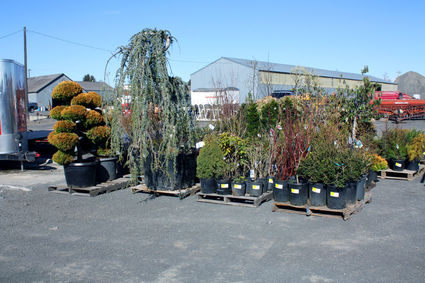 A plant nursery owner from Oregon supplied fruit trees, ornamental trees, shrubs and other landscape plants that were very popular with buyers during the 10th annual Firemen's Consignment Auction.

The 10th annual Firemen's Consignment Auction organized by Odessa's volunteer fire department was a success again this year, with not one leftover item remaining to be sold at the end of the day. The 282 registered bidders who attended last Saturday's sale in Odessa cleaned out the whole area that had been filled with vehicles, farm equipment, office equipment, brand new hardware items in their original packaging, fruit trees and shrubs, and just about everything imaginable.

Odessa Fire Chief Don Strebeck said the auction usually manages to sell all the items available. With the number of consignments on offer this year, however, no one would have been surprised to see a few left on the lot. Figures on how much the fire department made this year won't be available until next week, but the auction has made enough over the past 10 years to keep the department members in updated protective firefighting gear and equipment that keeps the volunteers safe and more efficient during fire season.

The bidders and their friends and onlookers who attended Saturday were also a hungry lot. Students in the school's FBLA chapter served burgers, candy and beverages and soon ran out of everything. Runs were made to Odessa Foods to restock. Those in the crowd appeared to enjoy themselves, and the entire event unfolded very smoothly, according to Strebeck. The firefighters work hard to put on this auction, and it has become a highly anticipated sale throughout the Odessa area and beyond.