Tigers coast to win over Oakesdale 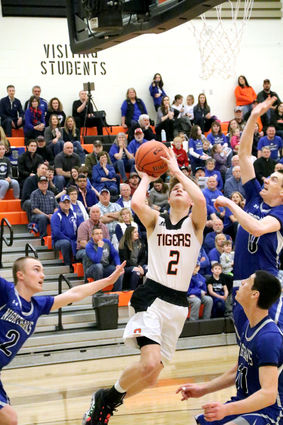 Ryan Moffet (2) scores amid a crowd of defenders in the Oakesdale game on Saturday in Spokane.

The regional playoff game against Oakesdale took place at West Valley High School in Spokane this past Saturday, Feb. 29. The Tigers had some trepidation about this matchup, said one Odessa fan. Early in the season, the two teams had met for a non-conference game, and although the Tigers won, it was quite a close contest all the way through three quarters. There was concern that the Nighthawks would be even better prepared for their second matchup.

As it turned out, Oakesdale could not get their shots to drop, and Odessa built up a commanding lead in th...