By Roger Harnack
The Journal

Duststorm, speed a factor in a four-vehicle crash 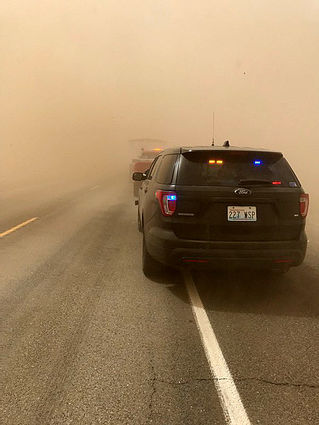 A duststorm swept through the community of Dusty on Monday, April 27, prompting the Washington State Patrol to close highways in the area.

DUSTY — A duststorm caused near-zero visibility and led to at least three crashes in the area Monday, April 27.

According to the Washington State Patrol, three people were cited in a four-vehicle crash for allegedly driving too fast for conditions on state Highway 25 three miles west of town.

The crash occurred when one driver slowed due to thick dust blowing off adjacent farm fields, the patrol reported. That vehicle was struck by another motorists, who was then struck by a tractor-trailer.

A fourth car swerved and sideswiped the trailer, the patrol said.

Nobody was injured, the patrol r...