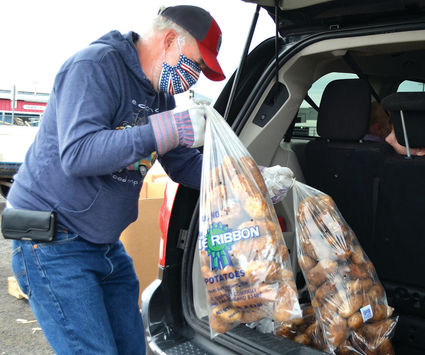 Jeff Schibel of Odessa volunteered Wednesday at the potato give away in Ritzville.

RITZVILLE - Eastern Washington potato growers donated 20 tons of spuds to area residents Wednesday rather than throw them away.

The potatos were grown primarily for restaurants.

But with Gov. Jay Inslee shutting down dine-in eateries statewide, the demand for potatos has dwindled, leaving farmers with tons of spuds to give away or throw away.

The quarantine orders have essentially shut down the economic engine of local potato farmers.

On Monday, the first of several potato giveaways took place on Main Street in Ritzville.

Residents from across the region came to pick up a few bags of farm-f...