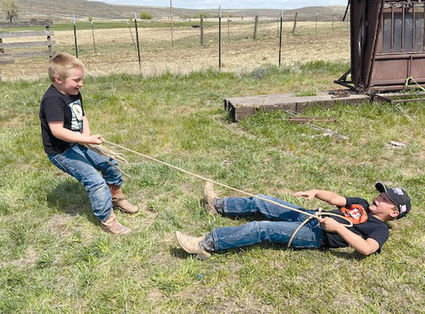 Kindergartener Hank and third-grader Hudson enjoyed trying to rope all the critters at Praetorius Ranch, including each other, over the weekend.

ODESSA -Another cattle ranch has checked in with The Record.

Like the Smiths in last week's edition, the crew at the ranch of Jack and Margaret Praetorius had plenty of help with branding, tagging and inoculating calves born earlier this year.

HaLee Walter was there to record the event for posterity.

As an added bonus, HaLee and Colley Walter's four sons - Tucker, Sawyer, Hudson and Hank - were treated to roping lessons.

The boys got to take their lariats home, where they practiced roping whatever was handy, including each other.

Since the Walters live just across the street from your e...