A Brief History of the County Line Church 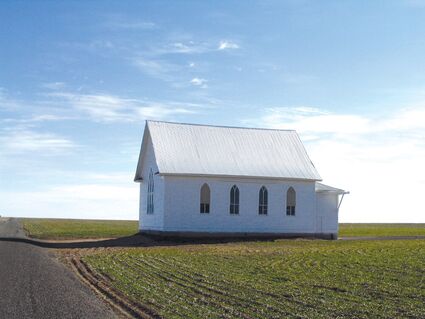 Barry Heimbigner | Special to The Record

The church building commonly known as the County Line church sits along the Lincoln/Adams county line but within Lincoln County on property currently owned by Dennis and Nona Thompson.

ODESSA – This week, The Record begins a series on the history of the Odessa region's immigrant past,

A history of the County Line Church could not begin without a recap of how such a significant concentration of families of Germanic ancestry ended up in the broader areas of Ritzville and Odessa, but more particularly, the area surrounding Packard where the Church was located. The story began in the central part of modern-day Germany, much of which today is the German state of Hesse.

Germany of the 18th century was a collective of hundreds of autonomous duchies, principalities, fiefdoms, etc., with no central government. This area within Europe, and Europe broadly had faced several hundred years of warfare and strife. To fund their wars and lifestyles, the miscellaneous dukes, princes, counts, lords and other potentates not only levied excessive taxes on the rank and file citizenry, but many locals were conscripted into various armies as mercenary soldiers. Religious differences created by the Reformation also led to cruel persecution. Simply stated, life for non-royals was extremely difficult.

In 1763 Catherine extended an open invitation to come to Russia and help settle the richly arable land of the Russian steppes. Roughly 30,000 mostly Germanic settlers took up her offer of free land, free transport to Russia, local self-government, freedom from military conscription and freedom of religious worship.

For more than a hundred years these settlers thrived in Russia. But as politics changed under Catherine's successors, the lure of free or cheap land in United States, combined with the ability to worship as they chose, once again formed the catalyst for many of these Germans to pull up stakes and move to America.

At roughly the same time, the Northern Pacific Railway was opening colonization offices in Germany and Scandinavia, as well as sending their agents as far as Russia's steppes to attract farmers with cheap package transportation and land purchase deals.

Exemplifying how this process worked was a group of some 17 families who arrived in Adams County in 1883, settling near Ritzville. They were known as Volga Germans because they were German-speaking and German-identified former residents of Russia's Volga River valley. They become the nucleus of the Russian-German population in the area.

The above history reflects a compilation of facts, reflections, and historical work researched and/or contributed by Dennis and Nona (Keison) Thompson current residents of the property on which the County Line Church sits, Marge Womach of Mohler, the late Otto Amen, former owner of the church property and Barry Heimbigner, 1967 Odessa High graduate currently residing in Snoqualmie.

To be continued next week...