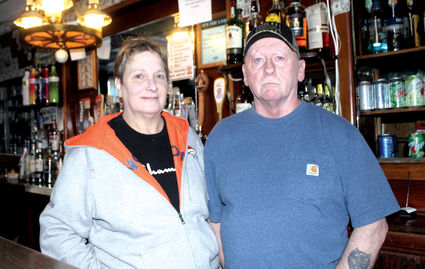 Hyde Out Bar and Grill owners Dale and Liz Mann worry about their business after being threatened by state liquor agent with fines and license revocation.

"This remains an extremely alarming situation," the governor said during a morning press conference announcing his intent to keep restaurants, bars, gymnasiums, theaters, bowling alleys and other businesses essentially shuttered until at least Jan. 4.

Restaurants and bars are allowed to have outdoor services, but owners say few patrons will sit in the cold. Others say they can't afford elaborate tent systems to provide for outdoor service this time of year, especially when groups are limited to fewer than five or must prove they've quarantined for a week and tested negative for the virus.

Meanwhile, the governor's bureaucratic agencies continue to marshal forces through the Department of Labor and Industries, health agencies and even the Liquor and Cannabis Board to threaten businesses remaining open, lest they close permanently.

In small towns too, bureaucratic agencies are flexing their political muscle on behalf of Gov. Inslee.

In Colfax, for example, the Liquor Control and Cannabis Board dispatched an officer from Spokane to threaten Top Notch Café, a popular breakfast stop, and the Hyde Out Bar and Grill, the last tavern that had remained open in Whitman County.

Dale and Liz Mann, owners of the Hyde Out, said Tuesday after the governor's press conference that they're not sure how their business can survive, even downtown on Main Street.

Prior to a Dec. 1 visit from Spokane-based liquor agent Dale Golman, the establishment remained open for indoor service, even as local officials knew. Now, the tavern is closed as the Manns try to figure out the finances of staying open as a take-out only business.

They've laid off their only two employees and applied for state grant assistance, but aren't sure that's enough to save the business they've invested their life savings into.

They are consulting with attorneys to determine what legal action they can take.

"This makes no sense," Dale Mann said, noting it's OK for big-box retailers to have hundreds of customers, but a small family-run tavern isn't allowed to seat people at the less than a dozen tables available.

Across the street, Candace and Pete Koerner operate the Top Notch Café, which was visited by a liquor agent before Thanksgiving, but after Gov. Inslee's Nov. 15 lockdown orders.

"We're going to have to get creative," Candace Koerner said of trying to continue to operate the rest of the month with indoor dining services prohibited.

Koerner's business was visited by a Spokane-based liquor agent, as well, begging the question why a bureaucratic agency would send officers more than an hour away to threaten mom-and-pop businesses in a small town, she said.

In the larger Tri-City area, business owners fed up with the overreach of state bureaucratic agencies have opened their doors, held protests and even rallied in front of the homes of liquor agents who threatened them and elected officials who have failed to protect them.

Last Saturday, more than 75 protesters took to the street and parking lot outside Koko's Bartini in Kennewick, waving flags and holding signs.

Motorists passing by the 27th Place eatery honked in support.

Inside, patrons filled tables, ordered food and drinks, and enjoyed the evening. As they finished up their dinner, other customers were right there to fill the table again.

The protest and in-door service went for several hours.

Owner Dana Slovak even took time to personally grill hotdogs for the protesters.

Benton County Sheriff Jerry Hatcher, Pasco City Councilman Pete Serrano and other local leaders turned out to show their support for the restaurant.

Slovak's advice to other restauranteurs and business owners: "Open up."

The governor's quarantine shutdown came after one of his bureaucratic enforcement agencies lost a round in a Board of Industrial Insurance Appeals court to a Yakima-based fitness company that chose to stay open.

Judge William R. Strange ruled the state Department of Labor and Industries failed to provide enough evidence showing Anytime Fitness had employees remaining on the job when they were ordered to shut down.

The agency had ordered the fitness business, operated by Bradshaw Development Inc., to close and exorbitant fines of $9,639 and $28,917, as L&I ordered in July and August.

The company was represented by attorney Scott Brumback of Union Gap.