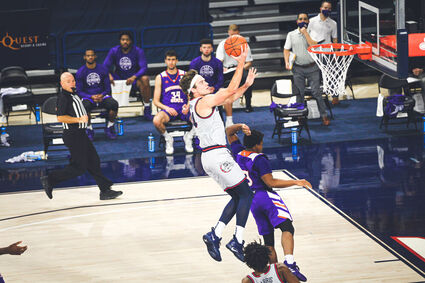 Gonzaga senior wing Corey Kispert glides to the hoop for a layup against Northwestern State. Kispert won WCC Player of the Week after several strong performances last week, including a 32-point output against Virginia.

Some won awards. Some tied school records. Many won their contests. It was a successful week for area sports teams and many individual athletes...especially for those playing hoops in Spokane and Pullman.

Oh, and the Seahawks clinched the NFC West thanks to an outstanding defensive effort against the Sean McVay-coached Rams, which had historically been a thorn in Pete Carroll's side.

The game included an interception thrown by Rams quarterback Jared Goff that was such a bad throw, local Davenport and Reardan quarterbacks started warming up immediately at home, expecting a call from McVay...