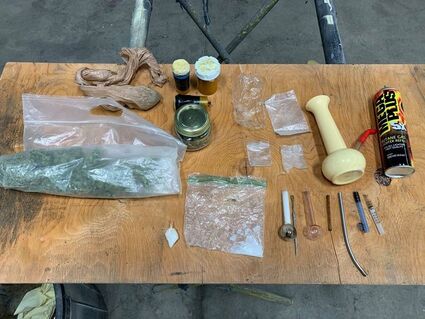 This drug paraphernalia was recovered from a suspicious vehicle following a tip from a concerned citizen.

WILBUR—A citizen informing Lincoln County Sheriff’s Office deputy Kurt Cuzzetto of a suspicious vehicle parked south of town resulted in an arrest on charges of criminal trespassing and driving with a suspended license and drugs being uncovered in the vehicle.

John A. Long, 42, of Moses Lake, was arrested Dec. 31, 2020 on two charges of criminal trespassing and three charges of driving with a suspended or revoked license. He was booked into Lincoln County Jail.

According to a press release from the sheriff’s office, Cuzzetto located the vehicle and found the driver, Long, and a female passenger, who claimed they had run out of gas and were awaiting help. Cuzzetto left but stayed in the area. 10 minutes later, the sheriff’s office received a call from the same citizen that the male had run his vehicle through that citizen’s fence, according to the release.

Cuzzetto found Long trying to dig the car out of the citizen’s driveway and detained him while requesting a tow for the vehicle. Long then began yelling in the back of Cuzzetto’s vehicle, saying if there was something illegal in the vehicle, it was dropped or planted there by someone else, according to the release.

In addition to the aforementioned charges, Long was cited for a driving violation. The apparent methamphetamine was sent to the state patrol crime lab for analysis, according to the release.

Long was no longer listed on the county jail roster by press time. Any updates will be made when available.