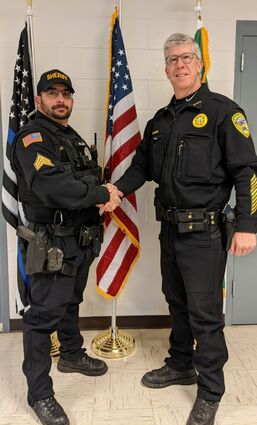 Jerad McLagan shakes hands with Sheriff Wade Magers upon his promotion to Sergeant.

DAVENPORT – Sheriff Wade Magers announced the promotion of Deputy Sheriff Jerad McLagan to Sergeant effective February 1. McLagan's knowledge, skills and professionalism, coupled with his top civil service scoring, made him a good fit on the administrative team. He has served almost 13 years in public safety.

McLagan began his career as a Stevens County Reserve in 2008 and was later hired as a corrections deputy. In 2009 he became a police officer in Kettle Falls and was hired by the Lincoln County Sheriff's Office in 201.

Sergeant McLagan has been involved in the Lincoln County commu...