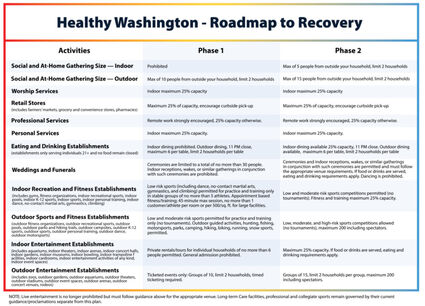 UPDATE: Hours after the press conference, the Governor's Office announced that areas moving to "Phase 2" can do so Sunday, Feb. 14, to allow restaurants, bars, taverns and theaters to be open for indoor service on Valentine's Day.

In a press conference today, Thursday, Feb. 11, Gov. Jay Inslee announced that 92 percent of all residents will be in Phase 2 counties.

The only counties remaining in Phase 1 are in the so-called "South-Central Region," which includes Columbia, Walla Walla, Benton, Franklin, Yakima and Kittitas counties.

Moving to Phase 2 means football and volleyball games can begin in local schools, and restaurants, bars, taverns, gymnasiums and theaters will be able to reopen indoor service in a limited capacity.

The governor's press conference was ongoing as this story was posted.