A win, a loss and a tie open Davenport's soccer season 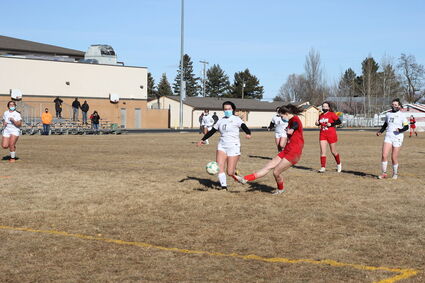 Darby Soliday strikes a shot that would bounce off the top of the goal in overtime Saturday. Davenport and NWC tied 2-2.

DAVENPORT – The defending 2B state soccer champions have notched a loss, tie and win so far this season in a strange, shortened 2020-21 "fall sports" season.

Some late-game heroics from Davenport's Darby Soliday were overshadowed by even later heroics from St. George's Margreit Galow. Galow scored a high-arching goal from about 25 yards out in the last minute and the Dragons topped the Gorillas 3-2 in the season opener Feb. 25.

Soliday tied the game with her second goal with 6:30 remaining, but the celebration was short lived after St. George's steadily moved on the attack before Galow's...