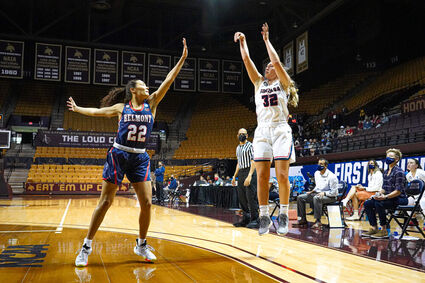 Gonzaga senior Jill Townsend shoots from deep. The Bulldogs lost in the first round of the NCAA Tournament to Belmont.

SAN MARCOS, TEXAS – Just 13 days after Jill Townsend's heroic buzzer-beating shot to beat BYU in the WCC Championship, the Gonzaga women were on the other end of heartbreak after falling to the Belmont Bruins of the Ohio Valley Conference in the first round of the NCAA Tournament March 22.

The No. 5 seeded Bulldogs lost to the No. 12 Bruins 64-59, concluding Gonzaga's season. Belmont had never won an NCAA Tournament game before.

Turnovers plagued Gonzaga, as the Bulldogs coughed up the ball 20 times and took it...