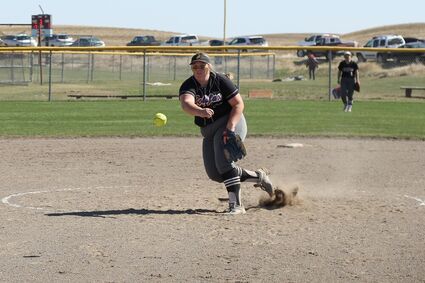 Colfax pitcher Jorja Koerner delivers one of her 10 strikeouts during the first game of Tuesday's doubleheader. The Bulldogs knocked off Reardan 16-0 in the first game.

REARDAN – The undefeated Colfax Bulldogs (6-0) scored plenty and gave up nill in a convincing two game sweep over the Reardan Indians (2-2) during the team's doubleheader April 20.

Pitcher Jorja Koerner was the star of the show for Colfax in the first game, a 16-0 six-inning victory for the Bulldogs. Koerner pitched all six innings, gave up just two hits and struck out 10 batters. She also batted cleanup and went 4-for-4 from the plate, driving in two home runs.