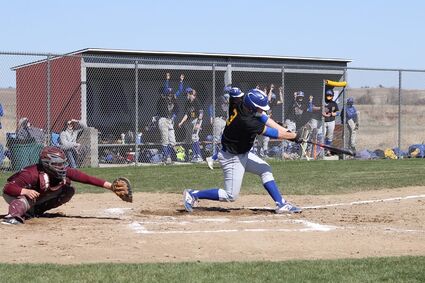 Colfax's Layne Gingrich connects on an RBI during the Bulldogs' 24-1 win in the first game of Tuesday's doubleheader.

REARDAN – The Colfax Bulldogs (6-0) continued their winning ways against the Reardan Indians (1-3), controlling the first game of a doubleheader 22-1 and holding on 5-2 in the second game.

Reardan took a 1-0 lead in the bottom of the first inning in its home opener when Abe Nelson scored Aiden Kieffer on an RBI double.

Colfax dominated from there, however, scoring 14 runs in the top of the second inning en route to the 22-1 final. The game was called after five innings.

Layne Gingrich was dominant for the Bulldogs, notching three hits with four RBI's and two runs scored. He also pitched...