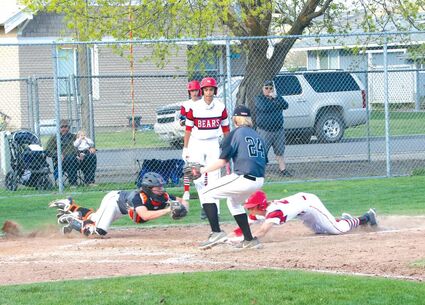 Odessa catcher Drew Hardung does his best to reach the base runner before he slides across home plate, but the call was "safe." Pitcher Nathan Carstensen was also in place to cover home plate if needed.

ODESSA – The Tigers put on a slugfest once again when they traveled to Hunters and won both games in a double header against the Lions of Columbia High School. The first game ended with a score of 30-3.

Tyesn Kuchenbuch was batting a thousand with five hits in his five at bats, including two doubles. He also picked up three RBIs. Tim DeWulf went four for five and had six RBIs. Nathan Carstensen went three for five, one for a double, and also had six RBIs. Both DeWulf and Hayden Miller hit home runs. Jett Nelson had three hits in six at bats, and two of those hits were triples.