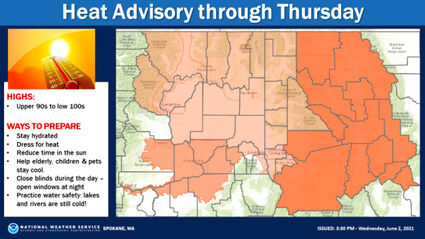 PASCO — Most of Eastern Washington will remain under a heat advisory through 8 p.m. Thursday night, June 3, as temperatures break into the 100s for the first time this summer.

According to the National Weather Service, the Lower Columbia Valley can expect temperatures to remain at or above 100 degrees.

"Hot temperatures may cause heat illnesses," the National Weather Service advisory said, noting temperatures will remain in the mid-100s in the area from Othello north to Omak and Grand Coulee, includin...