Boys let Liberty get away 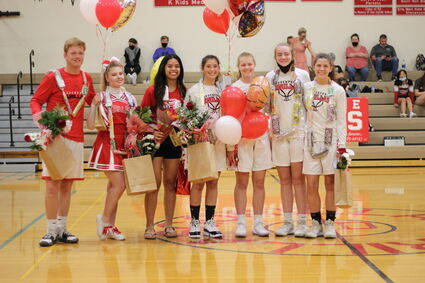 Davenport seniors in basketball and cheer were recognized prior to the games against Liberty Tuesday, June 8. The seniors are, from left to right, Ethan Douse, Adria Crandall, Anella Faumuina, Milei Floyd, Haley Greenwood, Ellie Telford and Darby Soliday.

DAVENPORT – It was only fitting that it would be Ellie Telford and Darby Soliday, the leaders of the Lady Gorillas, who led Davenport to a convincing 63-40 victory over the Liberty Lancers in a nonleague tilt on Senior Night. Telford scored 23 points and grabbed 14 rebounds, while Soliday had 17 points, 12 rebounds and six assists as the Gorillas improved to 8-1 on the season and 1-0 in nonleague play.

Liberty looked like it would have a fighting chance early, taking an 11-9 lead after the second quarter. But as has often been the case this season, Davenport turned up the pressure in the...